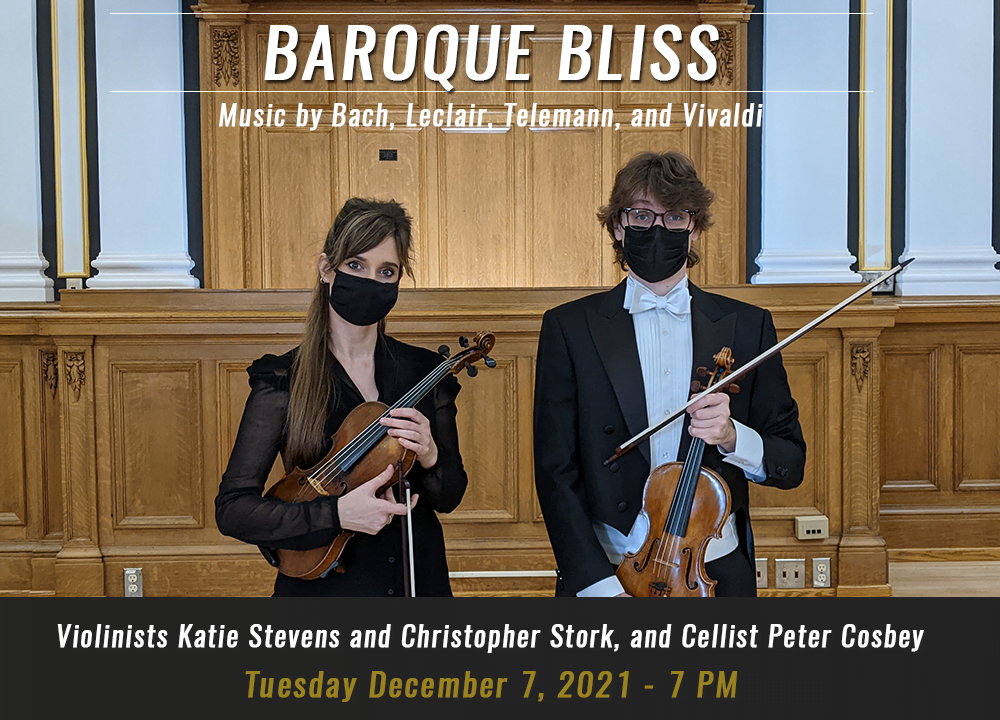 We have come to the fourth and final concert in our virtual video series! As we conclude, we could not fail to include a concert from our favourite period of music, so we are pleased to present “Baroque Bliss”, with a Telemann solo violin Fantasia and eighteenth-century violin duos by Vivaldi, Leclair, and Telemann.

Katie Stevens (TBSO’s Assistant Concertmaster) returns and is joined by Christopher Stork, TBSO’s new Principal Second Violinist. As a special treat, Peter Cosbey sensitively performs a gorgeous J. S. Bach suite for solo cello, consisting of a prelude and five stylized dance movements. This is the one concert of our 43rd season which harks back to our roots, and although our label is “Baroque and Beyond”, in the past we did concentrate on the Baroque era. I know that many of you have been yearning for some music of this period. Please enjoy!

Much is known about Bach, Vivaldi and Telemann, but Jean-Marie Leclair remains a more ambiguous figure to most. He was both a composer and a well-travelled virtuoso violinist and is credited as being the founder of the modern French violin school. His performance style was characterized by precision and refinement.

Looking at Leclair’s background beyond things musical, we are surprised to discover that he excelled at lacemaking; his father was a master lacemaker. He was also highly skilled at dancing, becoming principal dancer and ballet master at the Teatro Regio of Turin, Italy at the age of 25, 8 years before writing his Op. 3.

But most startling to discover was word of the unsolved, violent murder of Jean-Marie Leclair, which took place in the dead of night on October 22, 1764 in a dangerous quarter of Paris. He was stabbed to death in his ramshackle house at the age of 67. His body was discovered by his gardener in the morning. Suspicion rested on two family members, his nephew and his estranged wife, presumably for financial gain, but nothing was ever proved, and the murder forever remains a mystery!

The earliest work you will hear in our concert is J. S. Bach’s magnificent unaccompanied Cello Suite No. 2 in D minor, BWV 1008, written between 1717 and 1723 while Bach was Kapellmeister at the court of Prince Leopold in Köthen. During this period Bach wrote chiefly secular, instrumental music, including suites and sonatas for solo instruments. The violin duets range from 1727 to 1730, and the latest work is the demanding, idiomatic Telemann Fantasia No. 7 for unaccompanied violin from 1735, admirably played by Katie Stevens, to balance the unaccompanied 6-movement cello work. Our pieces were written within a very narrow window of time indeed.

The Vivaldi Duo is undated. It is in the typically Italian fast-slow-fast form. It is very sonorous and appealing, with energetic outer movements. It also exists with an optional, but unnecessary bass part, with the two violins jointly providing the implied harmonies as they jump around. I have selected some of the most appealing musical examples for you, ensuring that there is variety of texture (solo versus duo) and of style (dance-like versus contrapuntal), and that the keys chosen go well together, with both major and minor represented.

Johann Joachim Quantz was a German composer, flute player, and theorist. He was invited by King Frederick the Great of Prussia to join his court at Potsdam in 1741, the year of Vivaldi’s death, and was employed as court composer and private flute teacher to the king. Quantz and Georg Philipp Telemann (two of whose works are on our programme) admired each other, and both composed duos, so it is apt to quote what Quantz wrote on the qualities of a good duet, as set forth in his preface to his “Six duets for two transverse flutes” of 1759, not too long after the dates of our duos. All seven points raised here hold true for the violin duets which you will hear; they will guide you in your listening:

Telemann’s Duos Opus 2 of 1727 were designated as “Six Sonatas without bass”. They are usually performed by two flutes, although the publication indicated they could be played with pairs of flutes, violins, or recorders. It was customary for sonatas to be designated on the title page as being playable on two or three different melodic instruments. Printed editions would fall into the hands of a greater number of musicians this way, resulting in more sales revenue. This was also the age of “how to play” tutors and treatises, so that there was a growing body of amateur performing musicians who would purchase printed parts. Many of these duos were not virtuosic, and could be used also for instructive purposes (master and student). Music-making was moving beyond the courts and cathedrals, and into the households.

Here is a summary of the Telemann Duo Op. 2, No. 5 in B minor, with its four contrasting movements. There is much exchanging of parts and roles throughout. Voices accompany each other only very briefly, if at all, just a few bars at a time. The first movement is a short “Largo”, slow and calm, with interweaving lines. The two voices answer each other at beginnings of phrases. A bright, peppy Vivace ensues, a relentless movement in perpetual motion. Its continuous 8th notes never let up except at cadence points. Violin 2 starts alone for 10 bars and is then imitated by violin 1. We also hear rapid exchanges of bar-long motives. It is hard to know which violinist is playing which part just by listening; the video makes their roles clearer, but there is much crossing of voices.

The third movement is in restrained triple meter and is in the relative major key of G. It is lyrical, with dotted figures and some imitation, as motives are echoed from one bar to the other. The final movement returns to B minor, and is a light, rollicking gigue in 9/8 time, with some imitation and voice crossing. It is happy and energetic, with relentless motion in 8th-note triplets continuing throughout.

Unlike Telemann’s duos. Jean-Marie Leclair’s Sonata Op. 3, No. 5 in E minor from 1730 is playable only on violins because of its range, idiomatic violin writing with leaps, etc., and its use of double-stops and even 4-note chords. The opening Allegro ma poco movement is very elegant, with sextuplet rhythmic figures and sweet harmonies in thirds. Sometimes the second violin part is higher than the first, and double stops appear in both parts. Next comes a gracious gavotte, a dance form. The flowing second violin part moves in 8th notes throughout; its many leaps delineate broken chords, filling in the harmony.

The final Presto is brisk and active, with continually flowing 16th notes which push on to the conclusion, albeit with one voice spelling off the other rhythmically from time to time. Sonorities of parallel 3rds and 6ths abound. There is much crossing of voices and sharing of melodies; the second part again was often the highest. The writing is very idiomatic for the violins. This is truly the work of a man who was also a master violinist!

Great praise is due to our amazing artists of the evening, who have given us an exemplary performance! I would like to share with you some details of their backgrounds and accomplishments and thank them for the great joy that they bring to us in this time of pandemic and separation.

Violinist Katie Stevens, Assistant Concertmaster with the TBSO, received top awards and bursaries from several organizations and foundations. She has performed with such orchestras as the Canadian Opera Company, the National Arts Centre, the Winnipeg Symphony, and the Manitoba Chamber Orchestra, as well as with Ottawa’s premier chamber orchestra, the Thirteen Strings.

Katie maintains an active teaching studio in Thunder Bay, has a deep love of chamber music, and enjoys dabbling in different musical genres, including jazz. She studied Baroque performance practice at Glenn Gould with Tafelmusik’s Jeanne Lamon and has a keen interest in this area. Katie has collaborated with virtuoso violinist Jeremy Bell on several occasions and performs regularly as lead violinist with Consortium.

We are delighted to welcome and introduce Christopher Stork to you, in his first appearance with Consortium Aurora Borealis. He recently won the position of Principal Second Violin with the Thunder Bay Symphony Orchestra. Originally from Vermont, he studied in NYC and went on to McGill University, earning a Bachelor’s degree followed by a Master’s in Violin Performance. Working with violinist Mark Fewer instilled in him a great love of, and enthusiasm for, the music of the Baroque. Chris spent three years playing on period instruments at Baroque pitch in Montreal, where he served as Principal Second Violin in the McGill Baroque Orchestra as well as in their Symphony Orchestra, and was also Concertmaster of the McGill Opera Orchestra.

Chris has a deep love for chamber music, and was second violinist with the Iceberg String Quartet, which won the grand prize at the McGill Chamber Music Competition. The ISQ subsequently studied and performed at the Royal Conservatory in The Hague, and made it to the semi-finals in the Illustrious Young Artists Award in Manhattan. Chris enjoyed the fantastic experience of partnering with Katie Stevens in “Baroque Bliss”, and eagerly looks forward to participating in Thunder Bay’s Baroque scene with Consortium in the future.

Acclaimed for his versatility in a wide variety of genres, cellist Peter Cosbey enjoys a career as a highly sought-after chamber musician, orchestral musician, composer, and educator. “His virtuosity is apparent with every stroke of his bow” (Echo Germanica). He is a founding member of The Annex Quartet, one of Canada’s most dynamic groups, which has appeared in hundreds of concerts, including at Carnegie Hall. They collaborated with Jane Bunnett to win the 2015 JUNO Award for Jazz Record of the Year.

Peter is an enthusiastic and dedicated teacher and chamber music coach and has taught and performed at many summer music festivals and programs. He is presently cellist with the Thunder Bay Symphony Orchestra, and is a member of the dynamic Cosbey Quintet. Peter Cosbey has become a regular, valued performer with Consortium Aurora Borealis, where he continues to enthrall audiences with his virtuosity, rich tone, and expressive style. Peter was featured in three performances in Consortium’s Fall 2021 virtual concert season.

Very special thanks go out as ever to Robin Smith of Robin Smith & Associates: CIBC Wood Gundy for being our Virtual Concert Season Sponsor. Robin has been a dedicated supporter for decades! We extend our gratitude as well to all our valued donors and subscribers who have helped to make our programming possible.

I trust you have enjoyed our presentations. I would love to hear back from you! Please share your comments in the live chat of our Virtual Concert or in the comments on YouTube. I do miss you and I am planning to record a short holiday greeting, which will hopefully be available on our website a few days before Christmas, if all goes well. It will go forth from my seasonally-decorated Toronto home and will consist of a video of a few 18th-century keyboard French Noëls, as well as possibly some traditional English Yuletide carols, performed on my French double harpsichord. Watch out for it! This lovely harpsichord was featured in numerous live Consortium concerts between 1989 and 2009, before I had the instrument moved to Toronto.

As a reminder, the 2021 tax year is almost over and we would be delighted if you would help support us with a donation. You will be issued a tax receipt, will receive recognition, and your support would be of incalculable help to us! Donations can be made by cheque or electronically: https://consortiumab.org/donate