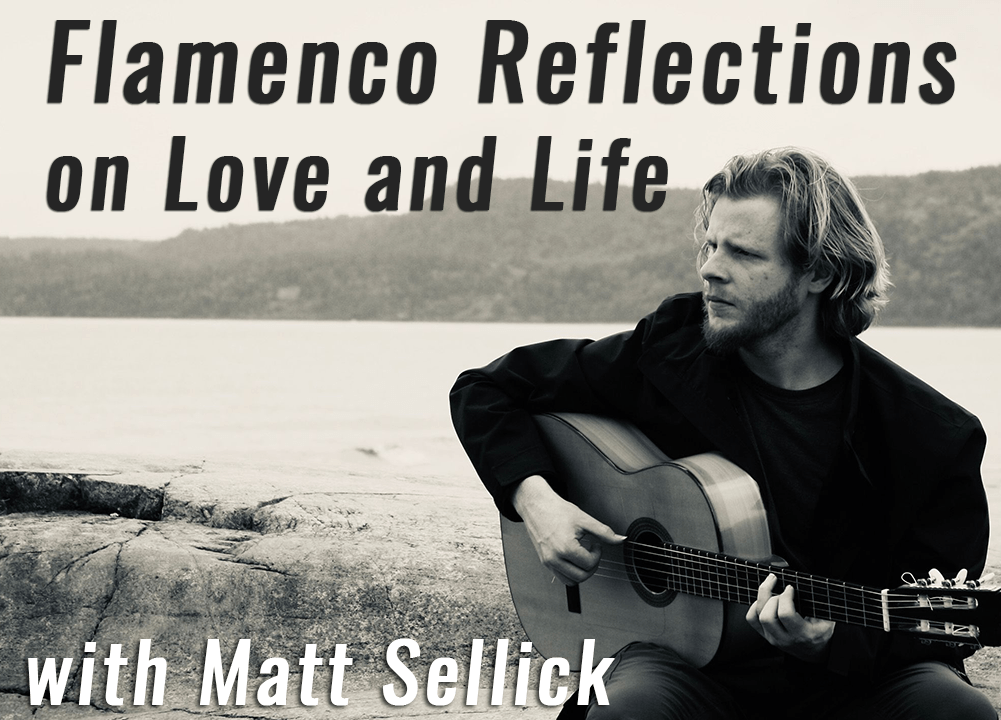 Flamenco Reflections on Love and Life

Matt was born and raised in Thunder Bay. His work takes a unique approach to traditional flamenco and he has a large, enthusiastic following. This marks the fourth time that Matt has performed for Consortium, two occasions having been fundraisers for us.

His performances are “heartfelt… passionate… hypnotic.” Toronto’s music magazine The Whole Note says he “obviously has a great feel for flamenco, an outstanding technique – clean, accurate and clearly defined – and plays with a warm rich sound and a lovely range of tone colour and shading…Sellick is clearly a huge talent.”

We welcome him back! Please enjoy! – Elizabeth

It’s been almost a year since I’ve stopped performing in person. This time last year, I was on tour in Europe with Jesse Cook, and we were about to start a Canadian tour. Some days, that feels like yesterday, but some days it feels like a lifetime ago.

I spent 2020 living in Toronto, writing my fourth solo guitar album, teaching guitar online, going for walks around High Park, and exploring ways to give virtual performances. It’s easy enough – though not ideal, of course – to give lessons over the Internet, but live performance is another thing entirely. I’ve become more accustomed than ever to performing in a band, but virtual band performances are logistically extremely difficult to pull off if you can’t at least be in a room with your co-performers. Well, I spent a lot of my 20’s developing my original solo repertoire, and I’m relieved to have that in my back pocket because it lends itself to isolated home performances. I find music for unaccompanied guitar extremely satisfying to write, but I never thought it could be something I would need to have in order to sustain myself.

Most of this performance’s repertoire is drawn from my 2019 album North Shore, which I composed in solitude on the shoreline of Lake Superior in summer 2018. The work is generally reflective, contemplative, and often melancholic. The concert is scheduled for release for Valentine’s Day, and while almost none of my music is overtly “romantic”, a lot of it is nonetheless an expression of love for places and people. I felt this would make it appropriate for February 14th this year; when we can’t be with people we love – whether they’re up the street or across the country – perhaps we can take a moment to reflect, and to appreciate what they mean to us.

The first piece is called Daydreamer. This one doesn’t fit into a traditional flamenco form, so sometimes we would label this canción (song) or tema libre (theme in free form/time). I flip back and forth on whether or not it should be called a “flamenco” piece. In the context of a flamenco album or performance, it feels perfectly at home to me. It has the phrasing, the style of expression, the chord shapes, some of the techniques … but with no context, I think it’s better called a piece “for flamenco guitar”. It’s a very personal piece to me, but I can share that it makes me think of my home in Thunder Bay, and the area around it. I miss it all the time, but especially right now.

The second piece is called Far Side. This is a flamenco form called a guajira; guajiras are usually in A major (although this is movable with a capo), always in a 3/4-6/8 dance rhythm, and have a “cliché” return section between each verse. As such, they’re pretty easily identifiable. This cliché line is present in almost all guajiras – although this section is not what makes it a guajira and it would still be one without it; if you hear that cliché, you know what form you’re listening to. In fact, a lot of flamenco forms work like this, and much of the effort I put into composition goes towards spinning these tropes in order to play on listeners’ expectations. This is part of setting up interesting twists and turns in forms that can be otherwise constrained in their meter and harmony.

This form is part of a category called cantes de ida y vuelta – these are forms developed from music that was taken to Latin America and later brought back to Andalucía (they are “songs that went and came back”). Guajiras tend to be overtly romantic, and the topic of the cante (song) tends to be seduction. That said, I didn’t have that specific intent towards the music at the time, and I simply wanted to write this form because I’d been playing them a lot as an accompanist. The singers and dancers I work with in Toronto really like guajiras, so I learned a bunch out of necessity. They’re really fun to play, and I wanted to have my own to perform! Sometimes it’s just that simple.

The third piece, Going Home, has not actually been released as a recording yet! It’ll be on my next album, which I plan to release later this year. It’s a rumba flamenca, which also puts it in the ida y vuelta category. I’ve loved rumbas since I was a kid; Jesse Cook’s rumbas are what hooked me on guitar in the first place. You might also know Mediterranean Sundance, from Friday Night in San Francisco, as a good example of the form.

Going Home is one of my favourite tunes of my own. To contrast it with the other rumbas I love, I wrote a simple arrangement where the guitar drives the groove instead of the percussion. The demo I made of this piece does have cajón and palmas (flamenco claps), but I find it doesn’t need them in performance, because the guitar is rhythmically relentless. This makes it fun to play, but also exhausting! On this topic, most flamenco forms can have palmas, but while they do enhance the groove and provide an “anchor” for the other performers, they’re not strictly necessary. The forms are all perfectly capable of being effective without percussion, and it’s only relatively recently (compared to the age of the genre) that more elaborate percussion setups have made their way into common use.

Sometimes I like that not having percussion, or any other instruments for that matter, can make a performance more intimate. The connection between the performer and the audience comes more into focus, and as a performer you have to be more aware of who you’re playing to rather than who you’re playing with. This can get challenging when you’re playing into a camera and a computer, but that awareness of your audience is what’s crucial in having your performance come across.

The rumba used to be a challenge for me. Some “aficionados” view them as a “lower form” of flamenco (hey, they’re fun and catchy, so what’s the problem?), and using them anything but sparingly puts you at risk of being considered a “not serious flamenco artist” … and I used to worry about where my work fell on the “traditional flamenco” vs. “flamenco-inspired” spectrum. Or more specifically, I couldn’t figure out where I wanted to fall on that spectrum. I used to try very hard to sound one way or the other at different times. I think it was in planning North Shore that I realized I had to stop thinking this way, or I’d never be able to write that album in the seven weeks I had allotted for it. At the time, I expected I’d end up writing a “flamenco-inspired” guitar album (really, for a lack of a better descriptor), but when I released the album, my colleagues told me it was the most “authentic flamenco” thing I’d done yet. It could be that the style of performance, the expression, the phrasing, the swing … these are what define “flamenco”, as much or more than the actual musical content does.

So, honestly? I’ve found that the path to an identity as a composer is to write what feels real and authentic to you, and to just be honest about your sources of inspiration. The only way to write that feels authentic to me is to draw from my experiences; these include growing up on the shoreline of Lake Superior and spending my early 20’s’ summers studying in Spain.

“Going Home” sure is something I’d like to be doing right now. Well, Toronto is my home, but so is Thunder Bay! “Home” can mean different things for me, too. It could be Edmonton, where my sister lives. It could be Madrid, or Granada! It could be Neys Provincial Park. I know we all miss a lot of people and places terribly these days. Even when I can’t visit the ones that are special to me, I’m grateful just to have those connections to them at all.

Finally, The Watch of Mars. This form is called granaínas, which is a kind of regional fandangos from Granada. It’s a “free” form in the sense that there is rhythm, but no meter; this would make it a kind of musical equivalent to prose. The tempo is also very flexible. Granaínas are always in (what is essentially) B Phrygian mode relative to the capo (you can think of it as the pitches of E minor but with the scale centered on B), and this is responsible for the form’s characteristic sound. Many of the chord shapes have the two highest strings (B and E, the tonic and the fourth) left open, so these can become pedals that sustain between different moments of the harmony. This is a common thread in much of flamenco – the specific scale degrees a particular form uses for its pedals can play a large part in defining its character.

Granada is the first place I studied flamenco in Spain, and for many summers I would return to get inspired, and write new music or arrangements. Besides Lake Superior (specifically Neys Provincial Park), it’s probably my favourite place in the world. These pieces are traditionally sung (the verses are usually about the beauty of the city of Granada, often specifically the Alhambra) and accompanied by guitar, but there’s never percussion. Unaccompanied solo guitar granaínas are common these days, and they’re perfect pieces for when you want to evoke a contemplative mood.

This performance comes to you from my apartment, in a basement across from High Park in Toronto. Generally speaking, flamenco performances tend to be social affairs. Stage plots can look like kitchen parties, you can have a dozen people on stage, and the audience gets a sense that they’re part of the action. Thinking about it, I actually don’t at all mind that the isolation of a global pandemic means I have the excuse to be different from that setup. In the middle of all that goes on, it is fun to be giving more intimate solo performances. But … I hope we can have both, again, sooner or later.

As always, thank you for listening. I hope you enjoy the format, and I look forward to performing in person in my hometown again.

P.S. – In lieu of performing in person these days, I offer private, pre-recorded, personally-tailored mini-concerts (not unlike this one!) as a service – they can be purchased as gifts for special occasions! I also give flamenco guitar lessons over Skype and Discord. If these appeal to you, you can contact me through my website at mattsellick.com/contact